Why write a chess engine in R?

Chess has always fascinated me. This is a game with simple rules that takes a lot of practice to master. No information is hidden from the players: the game state is clearly visible on the board, but strategies can be complex and subtle. This combination of simple rules and complex strategy becomes very relevant when attempting to write a chess engine. As we will see, a single line of R code is sufficient to implement a program that returns random legal moves. Creating a chess engine that actually plays well is another story.

Powerful chess engines have been developed that can currently defeat most human players. These are highly optimized pieces of software that:

My goal is not to recreate any of these advanced efforts. This would be unrealistic and, as a casual chess player and avid R programmer, I am more interested to discover the opportunities that R offers around chess. For example, multiple packages are available to plot game positions or to generate lists of legal moves. I am also curious to explore some of the standard algorithms used in chess engines (starting with minimax) and see how simple R implementations of these approaches translate into enjoyable chess games.

In essence, my simple R chess engine should be fun and informative to write and also entertaining to play against as a casual player. It serves as an opportunity to explore an uncommon but fun application of R.

With this introduction let’s dive into the world of R chess!

Before we start implementing any game logic it is important to ensure that some basic chess functionality is available. This includes:

The rchess package provides excellent functions that address these points.

Let’s start a new chess game and plot the board:

What moves are available for white? We can get a list of all legal moves via the moves function:

We can pick a move and update the game accordingly:

The next player to move is black:

and the available moves are:

Using the moves function we can already write a first chess engine that returns a random legal move:

We can use this simple function to generate full chess games with both sides played by the computer:

This game ended in a win for white and took only a few seconds to run. We can also get a summary of the board in FEN notation by using the fen function:

This FEN representation of the game state allows us to easily determine which pieces are still available for each player.

We can also confirm that the game is over, that checkmate occurred and that black is in check:

While playing a full random game is surprisingly simple with the help of the rchess package, we would like to start improving our engine in two ways:

Applying this function to our previous game we see that it correctly recognizes a win by white by returning a score of 1000:

So far we have implemented a function that quantifies whether a given position is advantageous for white or black. The second part of our engine builds on this result and focuses on searching through potential next moves to identify the best choice. We will use an algorithm called minimax to perform this search.

The figure below shows how minimax works on a toy example: 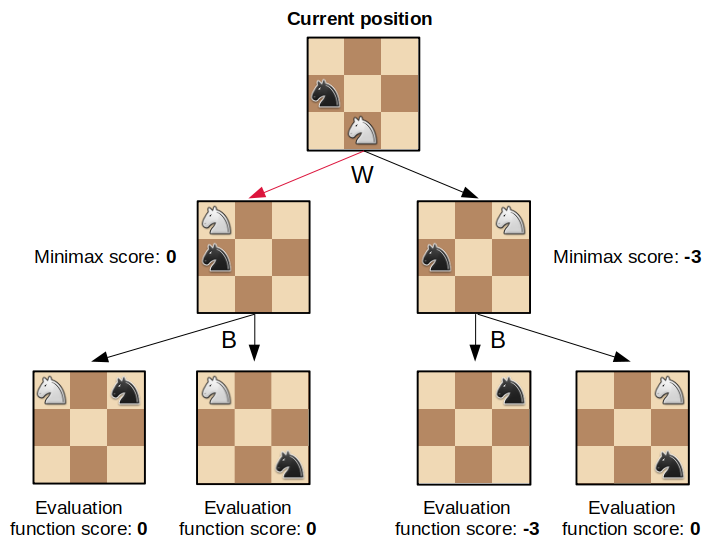 Figure 1: Example of minimax search for the best next move (white to move in the current position)

White starts at the root position and has two move options. For each option, black has two replies available. Figure 1 summarizes this tree of move possibilities and shows the heuristic score for each of the leaf nodes based on the position evaluation function we just defined.

Black will always pick the move that minimizes the heuristic score. In the right branch black will play the move that results in a score of -3, so white can predict that picking the right branch move will lead to a position with score -3. Picking the left branch move however will result in a score of 0, since black cannot capture any material. Based on this reasoning, white will chose the left branch since it leads to a more advantageous outcome even after black plays its best reply.

This minimax strategy is powerful in chess since it looks multiple moves ahead and evaluates positions assuming that each player makes optimal choices. We can also increase the height of this tree: the position evaluation will be more precise since more moves are tested but the runtime will also increase.

Let’s implement this algorithm in R:

This completes the minimax_scoring function that returns a score given an input position. Now we just need a wrapper function to evaluate all legal next moves via minimax_scoring and return the optimal choice:

The function get_minimax_move defines the complete logic for our computer chess player. We are now ready to test the performance of our algorithm.

Let’s first test the performance of our minimax-based chess engine by letting it play 10 games as white and 10 games as black against the random move generator we defined at the beginning of this article. If everything works as expected then our engine should win every time:

White wins every game by playing the minimax strategy against the random move generator:

Black also wins every game as the minimax player against random white moves:

This simple experiment shows that our minimax chess engine is indeed more powerful than a random move generator, but this is a fairly low bar. I have also tested this program against multiple chess apps and it was able to win games against opponents playing at a casual difficulty level. Increasing the minimax depth leads to stronger play, but evaluating more than four moves in advance was not feasible on my computer due to long runtimes.

Conclusion and next steps

Overall this simple R chess engine is fun to play against for a beginner or casual player, and writing it was a great way to practice the minimax algorithm. Numerous improvements can still be made.

Some updates that I plan to discuss in future posts are:

Programming a simple chess engine is an exciting journey through the many machine learning capabilities offered by R. Looking forward to the next steps!

For a full collection of R programming tutorials and exercises visit my website at codeRtime.org and the codeRtime YouTube channel.